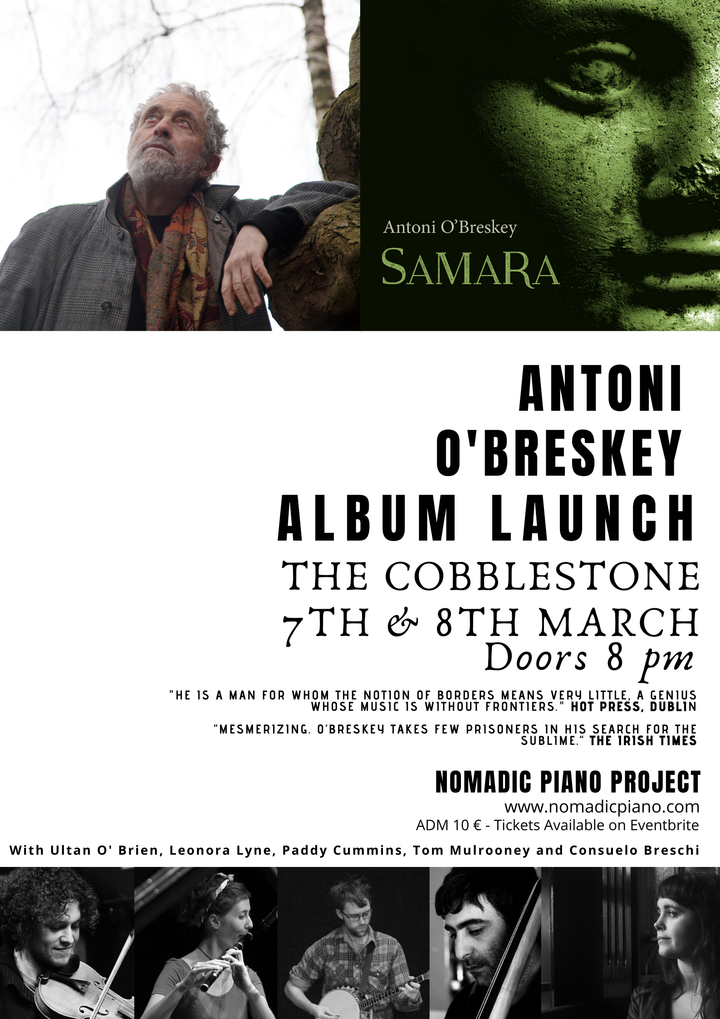 The Album comprises a journey between new compositions, such as Samara, Estonia, Kevin’s Polka and Xi’an Reel, two remixed versions of Antoni O’s past compositions: Nomadic Aura (2009) and Sue Morley’s Jig (1992), a live version of the historical piece, Dancing Leaves, a new version of Drunken Spider, a tune composed in 1992 that was never released to the public, and three traditional songs newly arranged: Derry So Fair, Wee Weaver, and The Longford Weaver.

“He is a man for whom the notion of borders means very little, a genius whose music is without frontiers, and whose originality makes him one of the most innovative artists in the varied musical genres of today, he gives us a strong idea of our roots, and in addition points out a few possible roads we might take in the future” OLIVER SWEENEY, HOTPRESS

“The categories of “World” and “New Age” music did not exist when O’ Breskey began his trailblazing journey yet he was the first to combine Flamenco, Basque, Arabic, Latin and Irish elements, his virtuoso jazz-styled piano uniting these traditions in remarkably original compositions.” FIONA RITCHIE, THE CURIOUS LISTENER’S GUIDE TO CELTIC MUSIC, NATIONAL PUBLIC RADIO U.S.A.\

“O’Breskey’s musical crossovers have an ethical imperative. He seeks to mesh the majority with the minority, the present with the past, and the vocal with the silenced, so as to “deflate the ethnocentrism of classical Western music. For this musician, musical cultures are not defined by borders, but by historical roots that reach deeply across all areas of the globe.”COLEEN TAYLOR, THE IRISH ECHO, NEW YORK

“Mesmerizing. O’Breskey takes few prisoners in his search for the sublime.“SIOBHAN LONG, THE IRISH TIMES

“A sailor of the heart, for those who still believe in buried treasures.”JAVIER RIOJO, EL PAIS, MADRID