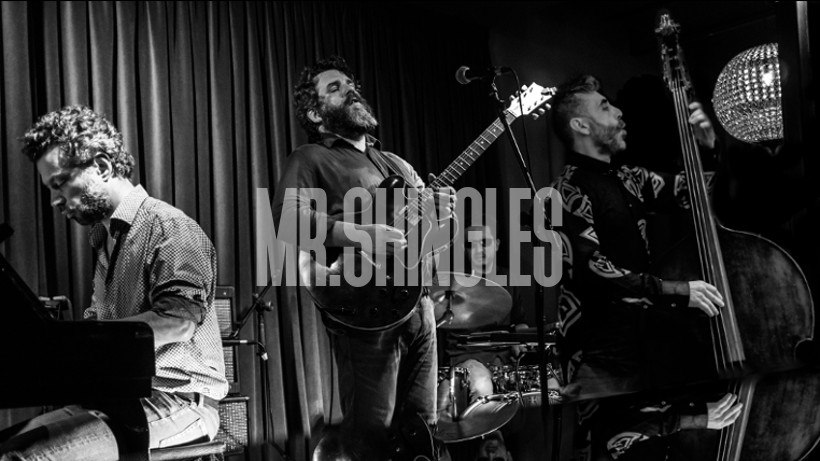 19th October 2019 Doors: 21:00 Price: 12€
***
Early Bird Admission €10 General Admission €12. Doors 8.30pm.
***
www.eventbrite.com/e/mr-shingles-presents-green-in-blue-tickets-55028202836
Hailing from Barcelona, Spain, Mr. Shingles was founded in 2015 with the purpose of covering legendary blues artists. From this classic blues base, they have developed their sound, mixing Blues and Swing with Latin beats and touches of Jazz and Gospel. They play in Barcelona’s most renowned venues and have played in many local festivals.
Mr. Shingles are currently touring their first studio album, “Green in Blue”, they define it as a coming together of African American and Irish cultures. A compilation of songs by Irish artists and arrangements of folk and blues classics with some originals, played in the blues style of the 1960’s.
Brian O’Mahony (vocals, guitar, harmonica)
Stephane Jais (vocals, piano)
Album Reviews:
“…In terms of “being green” on the studio scene, Mr. Shingles shines bright, and with refinement, they’ll be as lush as emeralds. Green in Blue is a commendable effort from a quirky quartet”
Rainey Wetnight, Blues Blast Magazine, USA
“…an honest interesting album performed by a group of musicians who know the music they play and carry it out with conviction and respect.”
Roser Infiesta, La Hora del Blues, Spain
“…An album that can definitely be called a must.”
Freddy Vandervelpen, Rootsville Magazine, The Netherlands
Other Links:
https://www.mrshingles.com
https://open.spotify.com/album/1ychRiODocQPMDnYPOzym3
https://itunes.apple.com/es/artist/mr-shingles/1402914335?l=en
https://www.facebook.com/mrshingles.blues/
https://www.instagram.com/mrshingles_blues/
https://twitter.com/ShinglesMr