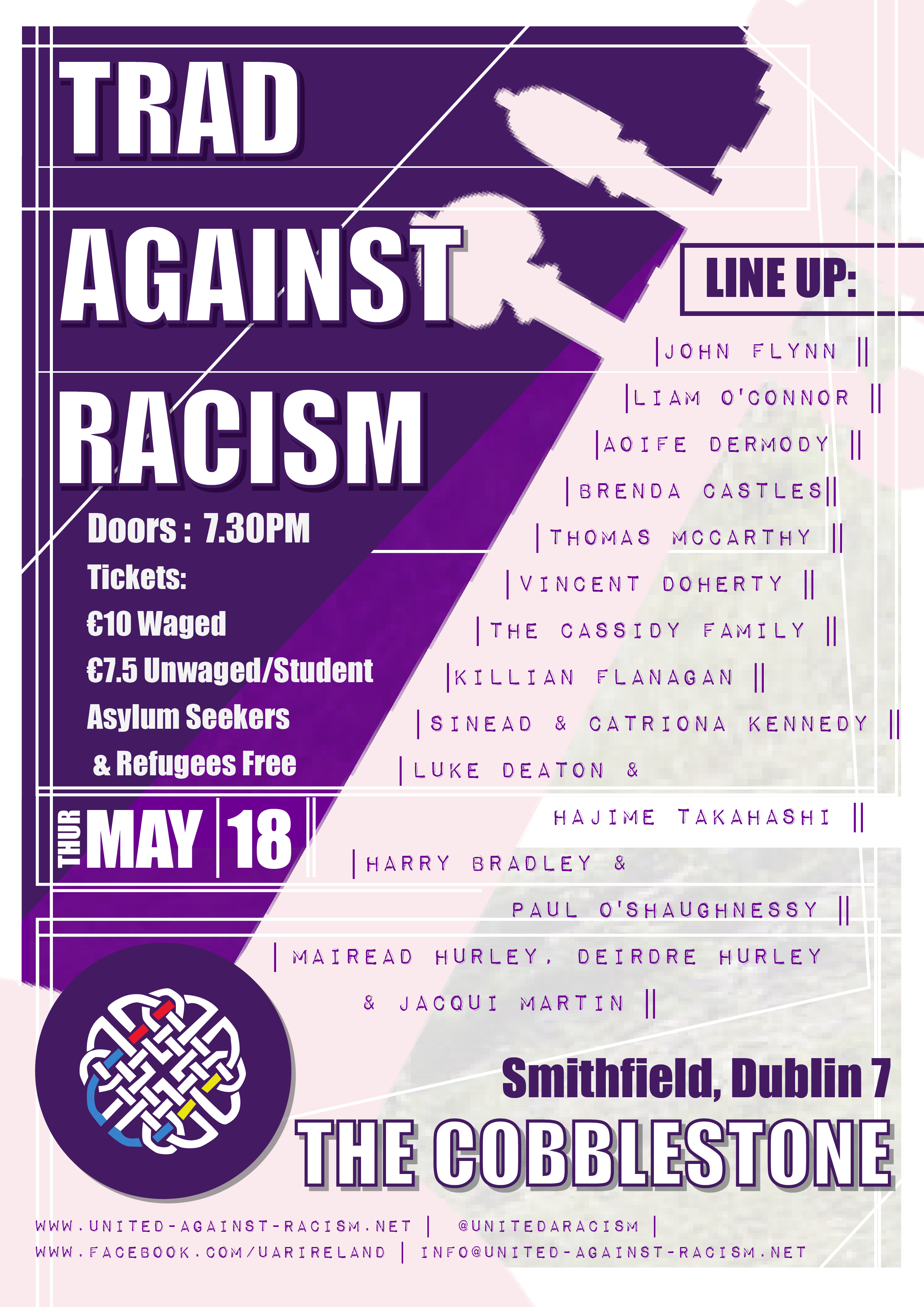 A night of music, spoken words and anti-racist solidarity.

Protest has been at the centre of Irish traditional folk music for generations. Our rich folk traditions have informed us about our revolutionary successes and failures, our famines and mass emigrations as well as about our loss of land, liberty and lives. Traditional music’s roots in social and political struggle may help explain why it has remained such a potent force in an ever-changing Ireland.

This ever-changing Ireland has now seen waves of immigration of foreign nationals, many fleeing the war and persecution we once fled. And how have these newcomers been treated on their arrival? They have been detained in out-of-sight Direct Provision detention centres, with no access to dignified work, no access to third-level education, where they find it difficult to make Irish friends, they live on a meagre €19 per week and unable to cross the border and experience the entirety of this tiny island.

On 18th May, with great support from the Cobblestone and various musicians, TRAD AGAINST RACISM will be a traditional protest and musical celebration of our common struggle for human rights and social justice. It will be an opportunity for UNITED AGAINST RACISM to raise funds to help combat this dehumanising racist policy akin to the apartheid regime and the Jim Crow policies in the United States.

Racial segregation in Ireland is real, and it is happening now. Help us end it. Racism is not just a mistaken idea or even just a morally wrong one. For working people it is a deadly enemy. It threatens to divert, derail and divide the resistance working class people put up to austerity, cuts, the bosses and the government. Getting working people to accept racist ideas and turn their anger on ‘foreigners’ (or Travellers, or Roma, etc.) makes them putty in the hands of unprincipled right wing politicians and right wing newspapers. It turns them, in the words of Bob Dylan, into ‘Only a Pawn in their Game’.

Racism is also a breeding ground for fascism and Nazism and they are busy trying to exploit it right across Europe. But fascism destroys all democracy and all workers’ rights and organizations. Hitler used anti-Semitism to get popular support at a time of deep economic crisis in Germany but the first people he put in concentration camps were German trade unionists and other progressive elements.

This is why it is vital we oppose racism on all fronts. When racist attacks or incidents occur, e.g assaults on individuals, or attacks on homes or shops, we should do our best to mobilise support and solidarity with the victims. We have to oppose state and institutional racism, opposing immigration controls and the racist treatment of asylum seekers. Racial discrimination should be exposed wherever it occurs and we need to challenge the myths about immigration circulated by politicians and the media. We also have to combat racist stereotyping of Travellers, Roma and Muslims. And we should give active support to anti-racist campaigning by organizations.